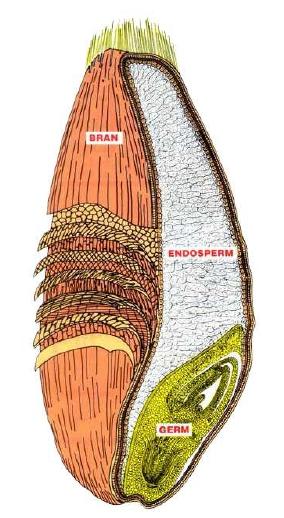 The company Antenore Visentin builds machines for all phases of wheat processing: for cleaning, for grinding and grading flour.

But what is the wheat ?

The image shows a section of a grain of wheat.

The bran is composed of six layers that follow , from the outside inwards . The last layer is the one of the cells aleuroniche . The bran has as a whole , a high content of mineral components (ash ) . The ash content is minimal in the first outer layers (2 to 2.5 % ) and is maximum in correspondence to the cells aleuroniche (from 7 to 8 % and more ) .

The endosperm or powdery mass is composed of starch cells mixed with gluten.

The beard is made ​​up of many small tubes that connect the atmosphere with the interior of the grain. The beard is therefore, as a whole , the organ of respiration of the fruit. Through the beard oxygen reaches the interior of the grain and you have carbon dioxide emissions . When the seed tends to germinate , intensifies breathing , with production of heat. For impediere this phenomenon must dry the corn and keep it at a moderate temperature .

The germ is located at one end of the grain on the side opposite to the beard , separated by a thin layer from the endosperm . And ' rich in nitrogenous substances , fats and minerals .

CHEMICAL COMPOSITION OF THE GRAIN OF WHEAT

The endosperm we have already said that it is composed of cells of starch granules mixed with smaller gluten .

It 'important component of the grain of wheat and consists of vegetable gum , vegetable fibrin and casein . It ' a very complex substance made ​​up of albuminoid . If they know of 5 different characteristics: the leucosina , edestin , and the protein components are soluble in water and therefore of little interest to the effects of baking . The other two components , gliadin and glutenin , are insoluble in water , but with this form a dough chewy, important for the successful outcome of the bakery . The gluten grains are concentrated in the outer endosperm , bran towards ; the percentage of gluten in these areas is double that on the inner ones .

It ' a carbohydrate, composed of carbon , hydrogen, oxygen . E ' devoid of nitrogen . Can be broken down into dextrin and sugar. These substances , in the human body , combine to combustion with oxygen , producing heat and therefore energy. The starch granules are concentrated in the inner endosperm .

Both are necessary for the preparation of bread . In the mixture of flour with baking powder and salt , by the action of proteolytic enzymes and diastasici , you have the breakdown of starch into sugar and yeast feeds on it by issuing the carbon dioxide gas in the form of bubbles that make the dough porous . But this gas must remain imprisoned in the dough itself, thanks to the tenacity and elasticity of gluten. If the gluten is weak , the gas escapes from mixing and bread is compact and low as unwelcome.