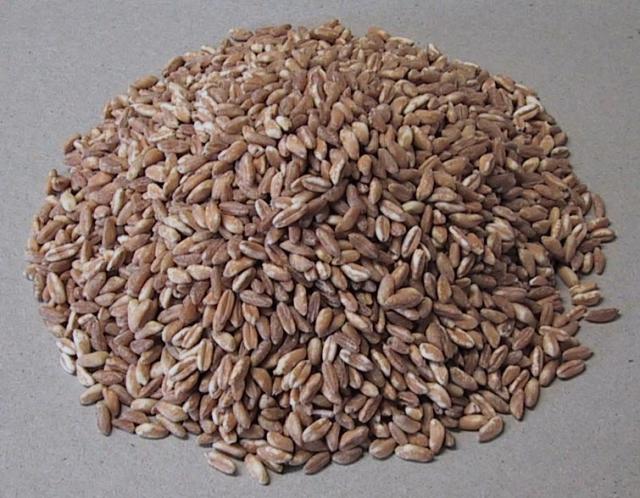 We've heard this definition of spelled.

In fact it is true that if we think of the production or dissemination is a cereal that has lost much ground compared to wheat.

But recently been gaining consideration , thanks to its characteristics from the nutritional point of view .

Spelt is different from wheat because it remains shrouded in husk after threshing .

The einkorn is distinguished by a high richness of protein (80 % greater than the wheat), vitamins and carotenoids , also possesses zinc and iron.

The einkorn contains little gluten (only 3%), it is therefore not suitable for people with celiac disease , but it seems that its gluten is more tolerable , some researchers argue that it is particularly suitable in weaning their children to reduce the chances of developing into a future Gluten intolerance .

(Ref. Studies at the Department of Gastroenterology of the Hospital of Brescia )

Spelt dicoco has a high content of vitamins and minerals, is rich in beta -glucans and has a low glycemic index.

Farro can be eaten in the form of beans shelled or pearled, for soups, stews or after cooking for salads .

Spelt flour can be used for pasta, bread , cookies , couscous , whether by solao that mixed with wheat flour.

Spelt can be flaked .

Spelt is suitable for the production of craft beers .

The first operation to be performed immediately after threshing is a pre-cleaning to separate straws and foreign elements and the next sequence Svestitura or Bramatura , someone call this Dehulling .

According to us, the more accurate term is Svestitura because it is necessary to remove the husk remained adhering to the grains , it is important to do this even for the conservation of the grains .

The weight of husk or husks corresponds to a 25 % of the weight of the cereal before its decortication / svestitura .

The systems for decorticate / undress spelled are of three types:

The most simple and economical but not very efficient is a shelling machine formed by a stone disk and a rubber product enters centrally , the hard stone wheel the rubber disk remains stationary . This system has an efficiency rarely exceeds 80 % of seeds compared to seeds not unclothed undressed .

Seeds and husk go out together and then you need to separate the husk from the grains with a aspirator and then divide the seeds shelled from those not shelled .

A more efficient system is the system of the impingement JP with this machine the seeds come into a rotor and are thrown against a wall of a particular material , the advantage JP and that you have many less breakage of seeds, and the efficiency of svestitura exceeds 90-95% .

With this system, the product comes already separated by a part spelled undressed and another output from the husk .

Another system is the system svestitura SATAKE , a horizontal machine similar externally to a shelling machine horizontal , but internally it is a machine with a rotor without stones and with a mantle of octagonal shape, also in this case the seed husk and leave together.

To separate the seeds from non unclothed undressed machines that can be used are: Drum svecciatoio , densimetric table or paddy .

Then you can perform accurate processing of cleaning or decortication or pearling for the product intended to be sold with whole grains .

To transform the spelled flour , generally using millstones , this to better preserve the nutritional carrateristiche present in the grain and in particular the substances germ .