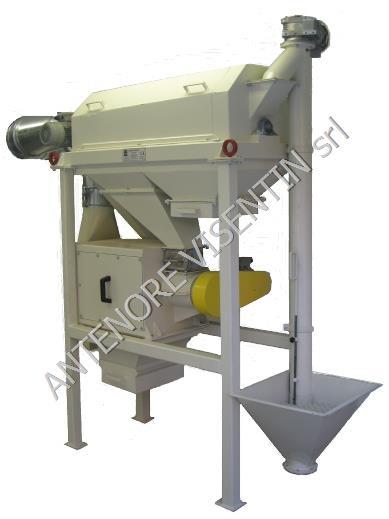 A complete cleaning of the cereal in a small space.

In this machine the grain undergoes the following cleaning treatments:
-Eliminates all foreign elements, with the bigger or smaller size than the product, for example: stones, straw, vetch, string, sand, dirt, small seeds, etc. The cleaning is done through a calibrator with two mantles made of special mesh, with slots of two different sizes.
-Are eliminated by an special air flow, light elements such as straw and chaff which have not been previously eliminated.
-A magnetic separator holds metallic elements.
-Vetch and other round seeds are then being separated.
-A brush vigorously cleans then the grain by rubbing the grain and removing dust or soil that adheres to the grain; it's removed also the beard and the broken empty seeds.
-A second current of air running in countercurrent washes the cereal.